In order to simply production, Jagdpanzer 38(t) Hetzer Starr armed with rigidly mounted and recoilless 75mm Pak 39/1 L/48 was being developed since December of 1943. Production of prototype series of 10 started in May of 1944 and ended in February of 1945, when additional 100 vehicles were ordered, but the end of the war ended further development. Interesting fact is that after the war, nine of ten Hetzer Starr were rebuild to their original specifications. 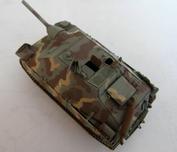